It just proves to me how few I have read among the nominees! Probably why I never feel able to vote.

I would have thought the Colin Insole and Christopher Harman collections might have been included. But there are many other books I would have included in the various categories, and, as I say, I feel I have not read enough to make any choice meaningful. For example, a student of Weird Fiction in any year should have read the Zagava/Ex Occidente canon. And likewise, I myself have no doubt missed out on other large canons of stuff that should be considered for award.

My own 2013 collection (‘A Dead Monument To Once Ancient Hope’ – “…as much a ‘D.F. Lewis’ collection as it is an Ex Occidente Press homage to an European icon.”), and my 2013  edited anthology (‘Horror Without Victims’ – “… this is among the strongest anthologies published in 2013 and confirms Lewis’ standing as one of the most innovative editors currently working in the field of fantastic literature.” – Black Static review), and my Small Press Organization (Megazanthus Press) should have been nominated – well, of course!

Seriously, I am very grateful and proud that my ‘gestalt real-time reviewing’ itself has been nominated. Thanks so much. And congratulations to all nominees. And thanks to the British Fantasy Awards administrator for his hard work.

.
Today’s skyline — I have never before seen the North Sea with such a blue colour since I moved to this coast nearly 20 years ago: 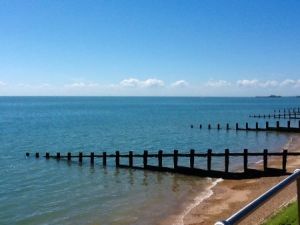 More of my skylines, trees, rocks and items of ‘found art’ on my main blog if you scroll gradually through it.