Edited by Ann and Jeff VanderMeer

When I real-time review this 1210 page anthology, my comments will appear in the thought stream below. 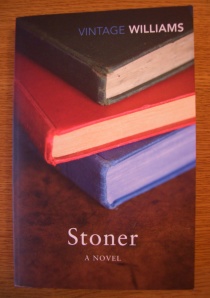 I have just read this novel. A moving story of a man who seems to me to be both the stone itself, stoical as stones tend to be, and the tragically sensitive, too – and the rich visions of the language in the book that pour through him and also through the reader remarkably convey this character and life, his relationship with an equally diffident wife, inscrutable daughter, his moments with a loving mistress, competing – like the ornery son-of-the-bitch he becomes in his sixties – with the rival in his academic University career, all remarkably told as he progresses in America through the former half of the 20th century and its two cruel wars.
The ending with his own written book, like the book that tells of it all, pouring into him is unbearably exquisite…
We are left as cool as he ever was, but weeping warm tears through the coolness.
A singular classic. Like the experience of Stoner’s first youthful encounter with a Shakespeare sonnet, we are with the words of this book. Think about it.

“… the whitest, frothiest, blossomest blossom that there ever could be, and I can see it.”
– Dennis Potter (when being interviewed by Melvyn Bragg)

Entering Haunted Houses is like entering stories, you need your wits and instinctive skills to summon or resist…