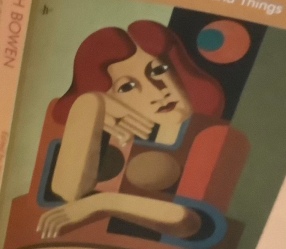 FLOWERS WILL DO by Elizabeth Bowen

“They put  the big picture early, and Mrs Lewis and I didn’t care to stay for the comic.”

I consider this to be a seminal Bowen work, with two separate instances  of an ‘elbow’ as well as, later, the use of ‘elbowed’ as a verb. A triangulate for an eventual foursome of two seeming couples loosely venturing into a form of Thirties troilism as a rhombus  of partner-swapping, in the jerry-built house’s flat below a similar flat where one of the women involved called Doris is living with her selfish and cross mother, and where Doris has often listened before to the rutting exchange of partners in this flat below. With shades of Aickman’s similar semi-absurdist scenarios in some of his stories about sex and marriage. And with shades of Bowen’s own cratered  MYSTERIOUS KÔR syndrome, too. The  characters — Doris (26 and over-ripe for marriage), and Doris’s selfish mother, and Sydney, Doris’s first boy friend who bought her flowers at her behest to compensate for a falsely loving engagement, and Polly Benger (about 40, the flighty woman in the flat below), and her latest man Leo — are all built up deftly in our mind with the random ricochets of a Bowen flair. Variously involving eyes weeping like jellies, a rescued shepherd’s pie, a timely elliptical “[…]” to indicate something ‘not very funny’, some nonsense about Clark Gable, bed-changing like digging a grave, and of course Sydney’s lilacs while Leo’s freesias, “flopping out of a carafe, waxy-sweetened the air.” Ms Bowen always allows us to stay for the comic, albeit the tragi-comic.

My reviews of Bowen stories: https://dflewisreviews.wordpress.com/31260-2/